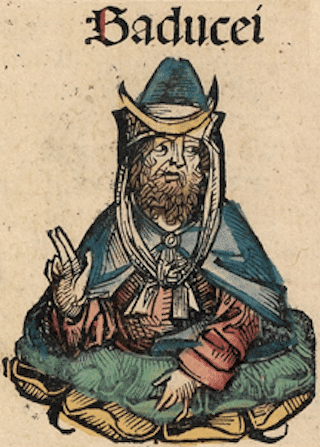 A Sadducee, illustrated in the 15th-century Nuremberg Chronicle

Today, c. 3728 AM: The control of the Beis HaMikdash was seized from the Sadducees.

As it is written in Megillas Taanis: “On the 27th thereof [=MarChesvan] they began again to bring the offerings of fine flour upon the altar.“

It makes one wonder, how long was the Beis HaMikdash in the control of the Sadducees–Tzadokim. Let’s make our own calculation.

We know the King Yanai [Alexander Jannaeus], was a Tzadoki. His reign started circa 170 years before the churban.

So one can assume that the Tzadokim were in control of the Beis Hamikdash for at least around 70 years.