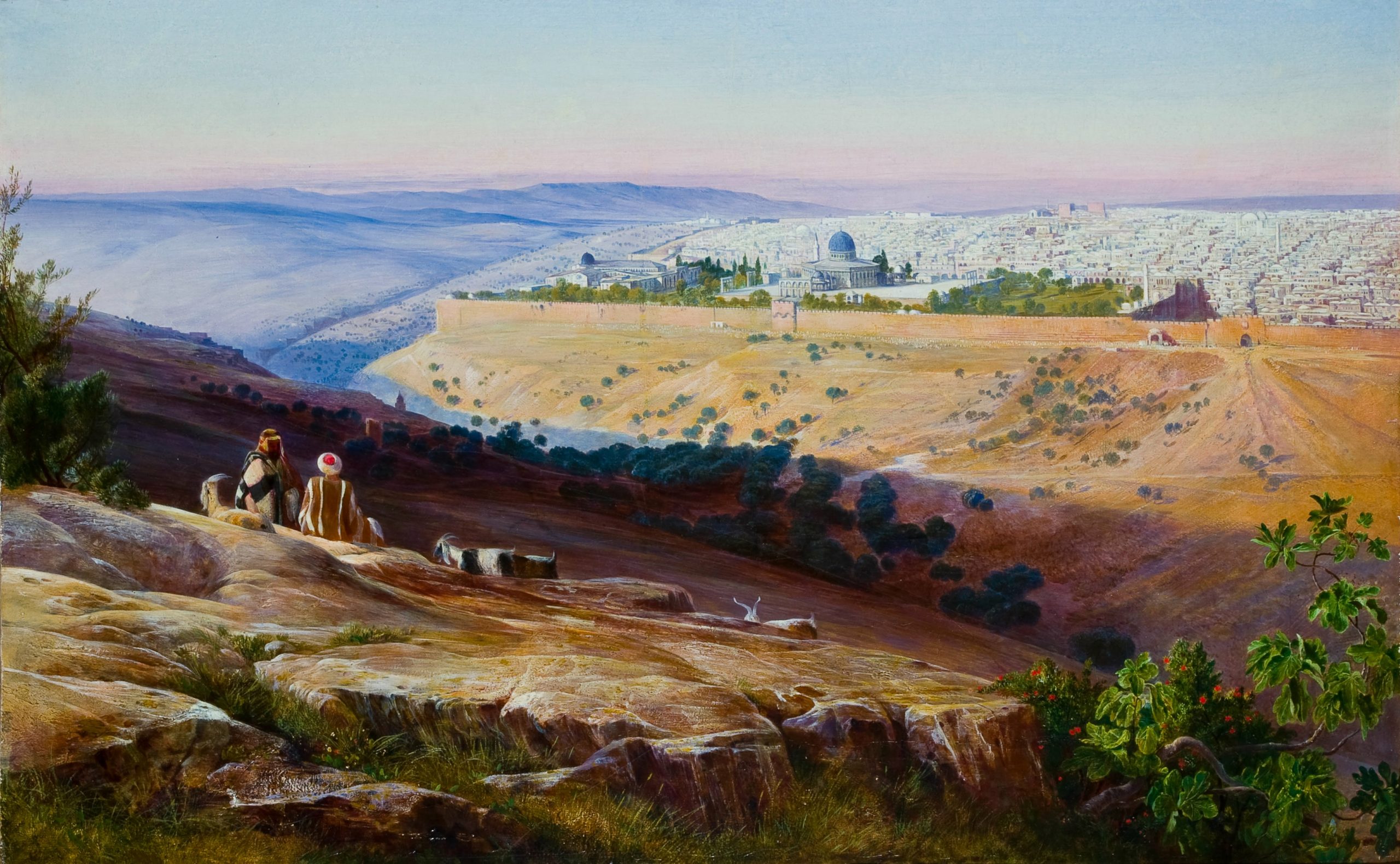 What the Journey Used to Entail

“There are many ways to travel to Yerushalayim.” With these words R’ Moshe Porges of Prague begins his travelogue. Today, travelling to Yerushalayim has never been easier. Take an airplane to Tel Aviv, from there you can hop on a train, and in under twenty-four hours from start to finish, you will arrive in Yerushalayim. Once upon a time, however, things were very different.

R’ Moshe Porges signs his name in his travelogue/sefer Darchei Tzion as follows: “Moshe, the son of the chassid R’ Naftali z”l of the majestic community of Prague, better known as Moshe the son of R’ Hirsch Porges, citizens of the holy city Yerushalayim, may it be rebuilt quickly in our times.”

So, who was this Moshe Porges?

R’ Moshe himself mentions that he was a relative of the Shelah Hakadosh: “My relative, R’ Yeshaya Halevi z”l, the rav of Prague, sent a psak halachah from Eretz Yisroel to the Diaspora.” It is not known exactly how they were related, but we assume R’ Moshe’s travels to Eretz Yisroel were connected to the Shelah Hakadosh’s trip there as well. As it happens, R’ Moshe was the brother of R’ Shlomo Singer of Prague, the author of the special song to be recited before Kabbalas Shabbos, as mentioned previously in the article “The History of Kabbalas Shabbos.”

In Darchei Tzion, besides describing the tale and information about the journey to Eretz Yisroel, he depicts the way of life in the city and many other interesting facts, as we will see.

One way to make this trip is via Vienna, and from there to join a group of tradesmen travelling to Constantinople [today Istanbul, Turkey]. One would have to secure themselves a place with the tradesmen in order to make their way to Ofen, which is called Budin in Turkish [today Budapest, Hungary].

The first and most essential step is to obtain a passport from the Emperor. It wouldn’t be too expensive since Vienna has its share of kind-hearted baalei chesed who would lend assistance in acquiring that passport.

From Vienna, one travels by ship on the Danube River until reaching Ofen. Once there, one could not alight from the ship until he received permission from the authorities, and only then would he be allowed to go to the Judengasse in Ofen.

To travel from Ofen to Belgrade, Serbia, takes nine days and the price is six Reichsthaler for three passengers.

It is advisable to rent a coach in Ofen to go the entire route to Constantinople instead of hiring a coach at each stop. Finding coaches en route to go the direction one wanted often proved difficult.

It is also best to purchase Turkish clothing in Ofen for the trip, because it is most reasonably priced there.

The month of Av is best for travelling, since the large ships would depart in the month of Elul and one is more likely to secure passage then.

If one prefers not to travel via Constantinople, one could go to nearby Klein-Rhodos, which is Rhaedestus [Tekirdağ, Turkey] in Turkish. To travel from Adrianople to Klein-Rhodos costs four Reichsthaler for three passengers.

Another option is to travel first to Lemberg [Lwiw, Ukraine].

One would have to arrive immediately after Pesach because the large groups of tradesmen would begin their trip in Iyar. The Jews there are eager to assist those travelling onward to the Holy Land in any way possible.

Whether one chooses to travel via Vienna or Lemberg, all roads converge in Constantinople.

How does one travel further? There are two options:

In Constantinople or Klein-Rhodos one would join everyone who was vying for a spot on a ship. Sailing to Gross-Rhodos [Rhodes] would cost one and a half Loewenthaler. In Rhodes many would get together and book passage on a larger ship which was equipped with oars. These particular ships do not venture far from the shore and at most a day away from dry land, but the oars were necessary in case there is no wind to move the ship.

When the wind does blow, the entire ship would tilt to one side. One need not worry, for Hashem watches over those who perform His mitzvos.

Departing the port of Rhodes requires payment of a tax which was one third of a Loewenthaler. The captain of the ship also receives four Loewenthaler from each passenger. The ship sails to Yafo, which is about a day and a half travel from Yerushalayim. If there is a good wind while sailing the journey is six days.

Upon arrival in Yafo, each passenger pays a tax of ten Loewenthalers and one additional Loewenthaler for the guard group escorting the caravan to Yerushalayim. For this tax, one receives a donkey for travel and enough space for one’s baggage.

In Yafo an officer would inspect all the luggage. If he found goods for trade, the traveller would be charged additional taxes. Therefore, if one was travelling with bolts of cloth for home use (bed linens, tablecloths, etc.) it was advisable to cut the fabric to size before he travels. Alternatively, there was always the option of bribing an officer not to search the luggage.

This is the way from Constantinople to Yerushalayim via the sea. The cost is about fifty Reichsthaler from Vienna to Yerushalayim. If one travels via Lemberg, it costs a bit more.

The way from Constantinople to Yerushalayim is very long. The trip takes approximately seven weeks and covers a distance of about 350 German miles [1000 miles/1620KM]. From Constantinople, one sails to Scutari [Uskudar, Greece] where travellers would assemble into groups and ride on mules. Each person is allowed two packages the weight of a German Zentner, or approximately 100 pounds. Large containers are not practical because it makes travel difficult.

The price of travel from Constantinople to Yerushalayim is at least thirty-three Loewenthaler, not including the many minor expenses that accrue on the journey.

Not everyone is able to handle this mode of travel. There is nothing to lean back on when riding a mule and it is torturous on the back and shoulders over such a long journey. For many, it is worthwhile to rent a seat to secure onto the back of the mule which would make the journey slightly more comfortable. However, this would require hiring an additional guide to lead the mule, which adds considerably to the cost.

The communities that are on the way include Ankara in Turkey and Aleppo and Damascus in Syria.

Most groups travel straight to Damascus and not via Ankara and Aleppo, thereby shaving a few miles off the trip.

Some would journey from Damascus to Tzfas, from Tzfas to Shechem, and from Shechem to Yerushalayim.

In Tzfas, every traveller has to pay two Reichsthaler, but for that price the guide will take you to the holy graves of tzaddikim in the area as well.

This was the “dry way” of travel from Vienna or Lemberg to Yerushalayim, for a grand total of approximately 100 Reichsthaler.

100 Reichsthaler was the value of about a half year’s wage of an unskilled worker.

Upon arriving in Yerushalayim, one had to wait at the gates of the city until the governor came and allowed entry. Each person had to pay two Reichsthaler in order to enter the city.

And there you have it.

It was no small feat to make it to the Holy City in one piece. The next time we travel to Yerushalayim, let us be thankful and grateful to the Ribbono Shel Olam that we can do this trip in one day!