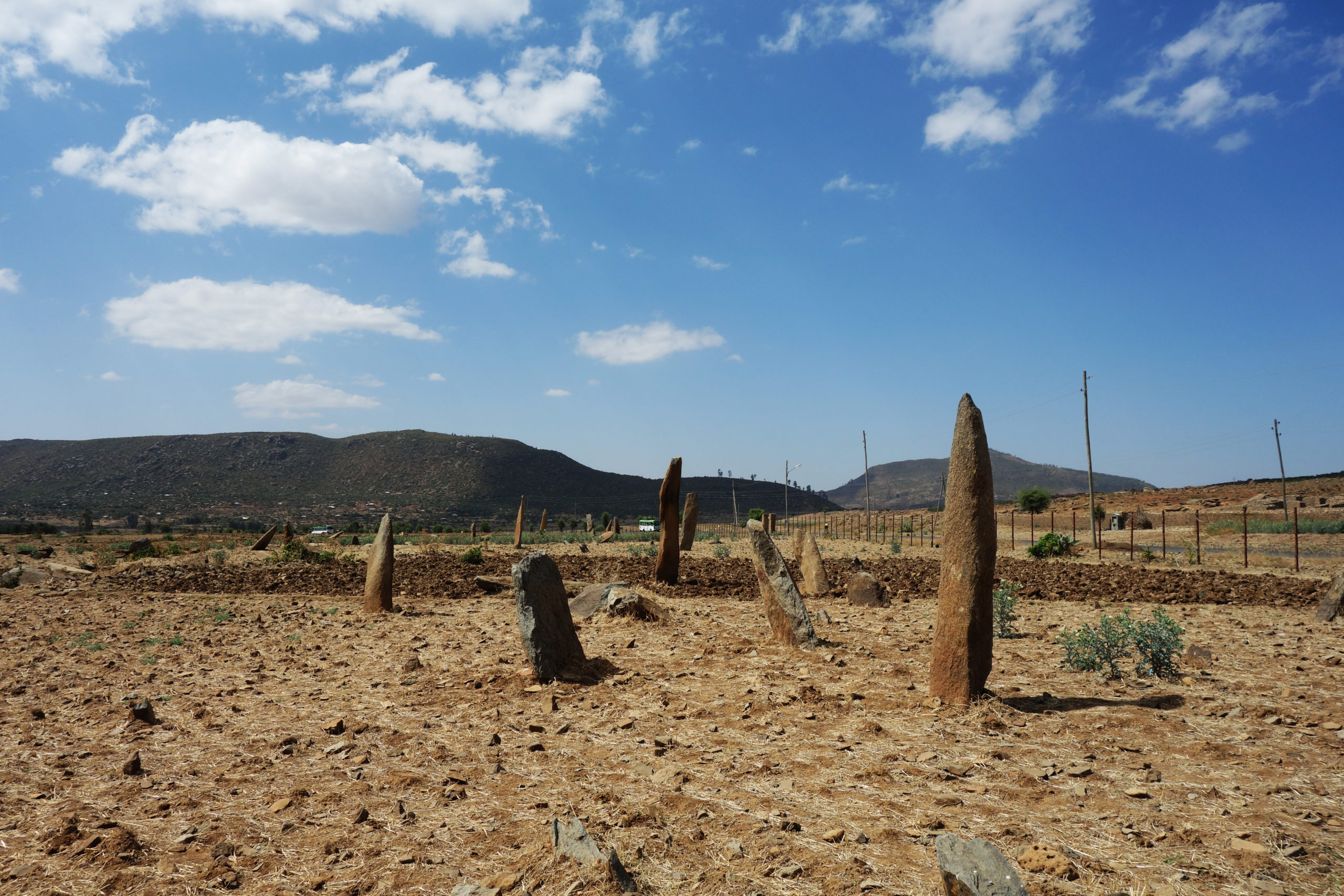 In our exploration of Jewish queens, we will now delve into a figure shrouded in mystery: Queen Judith of Ethiopia.  As is often the case with mysterious personalities, her story stands at the intersection of myth and reality.

She is known by many names; Judith, Yodit, Gudit, Esther, Isato, Ga’wa, and Tirda Gabaz, to name a few.1Weil, Shalva, “Ethiopian Jewish Women,” Jewish Women: A Comprehensive Historical Encyclopedia. 27 February 2009, Jewish Women’s Archive.  While in scholarly writings, she is most often referred to as Gudit, this is a pejorative meant to describe her as bad and destructive.2Andersen, Knud Tage, “The Queen of the Habasha in Ethiopian History, Tradition and Chronology,” Bulletin of the School of Oriental and African Studies, University of London, vol. 63, no. 1, 2000, pp. 31–63, JSTOR.   While we will discuss the reasons for her negative references, in the course of this article we will call her by the more positive name of Judith, the Anglicized version of Yehudis, which is how she is commonly referred to in Jewish sources.

Let us begin with what is known from the historical record.  The sources concur that Ethiopia was ruled by a woman 30-40 years during the middle of the tenth century.  In the year 945, this female ruler was very powerful and usurped the throne from the Aksumite Dynasty, which was undergoing its own political upheaval at the time due to a family feud.

This ruler proceeded to eradicate the entire Ethiopian royal family, which was believed by the Ethiopians to descend from Shlomo HaMelech and the Queen of Sheba.  Considering the Queen of Sheba converted to Judaism,3Shemos Raba 27:4. this would make their Monarchy Jewish.  In her conquest of the land, she burned the churches to the ground, and she sent the Ark of the Covenant into exile from its place in the Beis Hamikdash.4Shemos Raba 27:4.

This brief account of this female ruler’s conquest and reign leaves us with many glaring questions.  How did it come about that there was a Jewish queen ruling over Ethiopia?  Is there any validity to the claim that the Ethiopian royal family is descended from Shlomo HaMelech?  Does Judith really slaughter Jews?  Was the Ark of the Covenant ever in Ethiopia?  Let us begin our exploration.

Scholars debate the question of whether Judith was Jewish or a non-Christian pagan.  Traditional Ethiopian and Jewish sources are quite unequivocal that she was, in fact, a Jewess.5The Dictionary of Ethiopian Biography, Vol. 1 ‘From Early Times to the End of the Zagwé Dynasty c. 1270 A.D.,’ copyright © 1975, edited by Belaynesh Michael, S. Chojnacki and Richard Pankhurst, Institute of Ethiopian Studies, Addis Ababa, Ethiopia.  For the most part, Jewish based sources lean towards the view that she was Queen of the Beta Israel Kingdom of Semien,6“Judith (fl. 10th c.),” Women in World History: A Biographical Encyclopedia, Encyclopedia.com. while classical Ethiopian sources state that she was born a gentile, and converted when she married a Jewish prince from Syria.7Levi, Caroline, Yodit, p. 85.

Who is Beta Israel?

The members of the Ethiopian Jewish sect known as Beta Israel or the Falashas have a tradition that they descend from the tribe of Dan.  This tradition states further that they arrived in North Africa either during the days of Moshe, at the time of the schism between the Northern and Southern Kingdoms following Shlomo HaMelech’s death, or at the time of the exile of the Northern Kingdom.

The earliest source to corroborate this, dating back to the 9th century, is a person known as Eldad HaDani, whose writings are collected in Sefer Eldad.8Abraham Epstein, Eldad Ha-Dani: His Story and His Halakhot (Pressburg: Abraham David Alkalai Press, 1891).  To this day, scholars are quite uncertain about his origins and the veracity of what he wrote.  The first authoritative source to explicitly make the connection between the Ethiopian sect and the tribe of Dan, is Rabbi Ovadia of Bartenura.  He writes in a letter to his father, dated August 15, 1488, that he met two Ethiopian men in Egypt who claimed to have descended from the tribe of Dan.9Abraham Year, Letters from the Land of Israel (Ramat Gan: Masada, 1971, 2nd ed., Hebrew), 133

Within 100 years of Rabbi Ovadia of Bartenura, the Radvaz writes in his Shalos V’teshuvos that members of the Beta Israel community are Jewish and are descendants of the tribe of Dan.10Radvaz 7:5:20, 4:219:1.  While R’ Ovadia Yosef zt”l11Shu”t Yabi’a Omer vol. 8; Even HaEzer 11. famously relied on this Radvaz to recognize the Jewish status of the Beta Israel community when it migrated to Israel, almost all of the Ashkenazi authorities felt that the lineage of the Ethiopians was in doubt and that they, therefore, required conversion.12Rabbi Eliezer Waldenberg, Tzitz Eliezer, Volume 17, subject 48, page 105.

Was the Aksumite Dynasty  Descended From Shlomo HaMelech?

The Ethiopian national saga, Kebra Nagast, tells the story of the Queen of Sheba’s visit to Shlomo HaMelech in Yerushalayim.  It states further that she converted to Judaism and married Shlomo, with whom she had a son named Menilek, who became the first king of the Ethiopian Dynasty. Chazal, however, states that the only known descendant of her marriage to Shlomo was Nebuchadnezzar, who eventually destroyed the Beis HaMikdash that Shlomo built.13Rashi, Melachim vol. I, 10:13. See Seder HaDoros, year 3319.

Additionally, it’s not clear in Torah sources if Sheba is identical with Ethiopia.  The Abarbanel places the country in modern-day Yemen,14Yosef Tobi (2007), “Queen of Sheba”, Encyclopaedia Judaica, 16 (2nd ed.), Gale, p. 765. while the Me’am Loez and Josephus agree that Sheba was, in fact, Ethiopia.15Flavius, Josephus, Antiquities of the Jews, 8:165–173. According to this position, combined with Chazal’s statement that there was a descendant, it is possible to say that the Ethiopian Dynasty descended from Shlomo HaMelech and the Queen of Sheba.

Did Judith Slaughter Her Own People?

In light of the sources presenting Judith as a Jewess, one wonders whether Judith in fact slaughtered other Jews.  While it is possible that the Aksumite Dynasty had Jewish origins, by this point, when Judith came to power in Ethiopia, they surely were no longer Jews.  In 325, Ezana was crowned King of Aksum.  He had previously fallen under the influence of missionaries and proclaimed Christianity the new national religion.

The Jewish community of Ethiopia, however, was unwilling to abandon its faith, and a civil war ensued.  The country split and the Beta Israel Kingdom of Semien was established.16James Bruce, Travels to Discover the Source of the Nile, Page 408.  Six hundred years later, the Aksum Kingdom tried to conquer the Beta Israel lands, and although Gidon, King of Semien, was successful in driving away the enemy, he fell in battle.  His daughter, Judith, took over the kingdom, made some strategic military alliances, and went on the offensive.  She successfully conquered the Kingdom of Aksum, rid the country of everything Christian, eradicated the royal family, and made Judaism the state religion.17Encyclopedia of the Peoples of Africa and the Middle East. (2009). United States: Facts On File, Incorporated. p.223  With this in mind, we now understand why any source that is sensitive to the Christian world, would refer to Judith disparagingly and call her by the pejorative name Gudit.

Was the Ark of the Covenant Ever in Ethiopia?

There is an Ethiopian tradition, set forth in the Kebra Nagast, that when Menelik came of age, he went to Jerusalem to meet his father Shlomo.  The king sent his son back with many noblemen to escort him.  Along this journey, Menelik learned that one of the noblemen had stolen the Ark of the Covenant from the Beis HaMikdash.  The fact that despite the Ark’s supernatural powers, no one had been harmed by taking it from Yerushalayim, was taken by the Prince as a divine sign that the Ark was meant to be with him.  When Shlomo found out it had been pilfered, he sent his men after his son but they could not overtake him.  The King proceeded to instruct the Kohanim, not to say a word of this to the populace, and to build a decoy to place in the Beis HaMikdash.

As noted above, Jewish tradition as transmitted by Chazal contradicts the Ethiopian legend of a connection between an Ethiopian prince named Menelik and Shlomo HaMelech as well as the legend of the Ark – Aron being removed from the Beis HaMikdash and taken to Ethiopia.