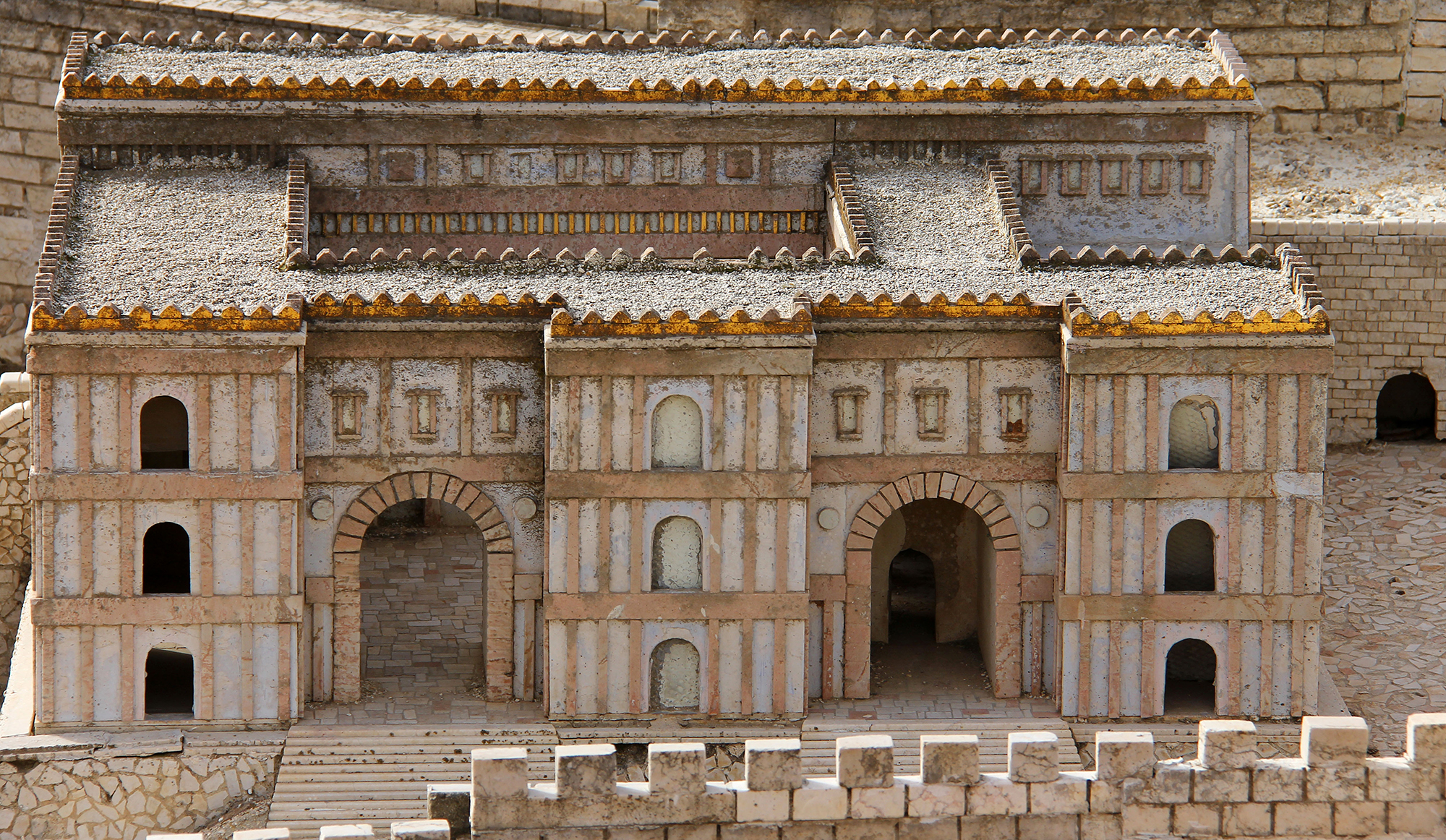 The Exception or the Norm?

In this month’s issue of Kankan, our exploration of Jewish queens will take us beyond the land of Israel, to a queen who began life as a gentile, Helena of Adiabene, known in the Gemara as Hilnei HaMalka.1Talmud Bavli, Sukka 2b Adiabene was a region in the  Assyrian Empire, located where modern-day Erbil now stands in Iraqi Kurdistan, roughly 1,300 kilometers north-east of Jerusalem. The small kingdom had fallen under the influence of the Persians, and later, the Parthians, but was likely semi-autonomous during the 1st century CE, which is the time period that concerns us.2Adiabene. Jewish Encyclopedia. 1906. Vol 1, p. 191.   Flavius Josephus dedicates a significant amount of the 20th book of Antiquities of the Jews to the story of Helena and her family, of whom he was a contemporary and with whom he likely interacted.3The Conversion of Adiabene to Judaism: A New Perspective. Journal of Biblical Literature Vol. 83, No. 1 (Mar., 1964), pp. 60-66   Seder HaDoros tells the story almost exactly according to Josephus’s account, putting it as happening around the year 50 CE.  We will now summarize this account while weaving in the words of Chazal.

Josephus introduces Helena to us as the wife and sister4In those days it was quite popular for kings to marry their own sister. of Monobazus/Bazeus, king of Adiabene, whom Chazal refers to as Monbaz. Helena bore a son to Monbaz named Izates who was the favorite and eventual heir to the king.  To protect Izates from the jealousy of his brothers, King Monbaz arranged for him to marry Samacha, the daughter of  Abennerig, the king of Charax-Spasini, which is located in the modern-day Basra Governorate of Iraq, roughly 900 kilometers south-east of Adiabene.

When Monbaz died, Helena called together her subjects and said the following to them: “I believe you are not unacquainted with that my husband was desirous that Izates should succeed him in the government, and thought him worthy to do so.  However, I await your determination, for, happy is he who receives a kingdom, not from a single person only, but from the willing suffrages of a great many.” The people accepted Izates as their king and suggested that all of his brothers should be put to death lest the new king fall to peril.  Helena suggested that the people wait until the new King arrives to execute judgment.  The people agreed, but suggested that the potential tormentors should be kept in bonds until their judgment, and that someone should be placed over the Kingdom as a custodian until Izates arrived. Helena selected Monbaz II, the oldest son of the deceased king.  Izates arrived quicker than expected, and the crown was placed on his head.  He had no intention of inflicting punishment on his rivals, but understood the threat that they posed.  So he sent them as hostages to Rome and Parthia.

While Izates was in Charax-Spasini, he fell under the influence of a Jewish merchant named Chananya.  During the same time, Helena was becoming inspired by Judaism back in Adiabene.

During this period, the people of Adiabene were adherents of Zoroastrianism, and in general, the Zoroastrians tolerated the Jews living in their midst.  Moreover, since  the destruction of the First Temple, the center of world Jewry had relocated to Babylon.  Thus, there was a large Jewish presence in this region during the period we are discussing.

One might wonder, however, about the interest of the aristocracy in Judaism.  We do find numerous instances of conversion during this era, with some of the well-known ones being those of Onkelos HaGer, Shemaya and Avtalyon, and Niron Keisar.  According to some accounts, there were large numbers of converts to Judaism during this time, reaching to the millions, thus accounting for a sizeable portion of the population of the Early Roman Empire.5Feldman, Louis H. “Conversion to Judaism in Classical Antiquity.” Hebrew Union College Annual, vol. 74, 2003, pp. 115–156.   How are we to understand this?

At the beginning of the Second Commonwealth, the Anshei Knesses HaGedola, the supreme religious body of the newly reconstituted nation, convened to discuss solutions to the problems that had plagued the First Commonwealth.6Talmud Bavli, Sanhedrin 64a  One of those problems was Avoda Zara, or polytheism and idol worship.  The members of the Anshei Kenesses HaGedola fasted and prayed for three days that the inclination towards such activities should be eradicated, and their prayers were answered.

From this point forward in history, the world made a slow movement away from polytheism, which prior to this time had dominated virtually everywhere in the world.  The height of this movement towards monotheism was Mesopotamia in the first century CE.  This also helps explain the rise of  Christianity, and why it swept the Roman Empire since it offered a watered-down version of ethical monotheism without the obligations of Judaism.

Thus, while the experiences of Izates and Helena were not quite the norm, they were not that uncommon either.  There are those who maintain the possibility that their motivations were strategic and political in nature,7The Conversion of Adiabene to Judaism: A New Perspective. Journal of Biblical Literature Vol. 83, No. 1 (Mar., 1964), pp. 60-66 but Chazal paints them as sincere converts, as we will see.

Upon being reunited with his mother and learning that she also had taken an interest in Judaism, Izates moved towards fully embracing the religion of Israel. However, Helena prevented him from taking the final step and actually converting, fearing that it would endanger him amongst his subjects.  Chananya, his teacher, agreed with Helena, fearing for his own life in the event that the king were to convert.  For the time being, Izates heeded his mother and teacher.

According to Josephus and Seder HaDoros, some time later, the king fell under the influence of another Jew named Elazar who took a different approach, and felt that Izates should no longer straddle the fence.  Izates decided to proceed with his conversion and summoned a surgeon to perform the circumcision.  Both Helena and Chananya feared what was to follow, but Hashem watched over the king, and he and his family remained unmolested.  The Midrash8Bereshis Raba 46:10 teaches that both Izates and his older brother Monbaz II secretly underwent circumcision while their father was still alive.  Fearing for the king’s wrath, Helena told the king that both boys needed surgery to remove warts and that the surgery called for circumcision.

Reconstruction of the tombs of the kings, Jerusalem

Once the Queen Mother saw that things were tranquil at home, she decided to travel to Jerusalem to bring Korbanos in the Beis HaMikdash. The king sent his mother off with great fanfare.  Upon arriving in the Holy City, Helena found the land stricken with famine, and her family then used its great wealth to bring desperately needed provisions to feed the residents of Jerusalem.

The Gemara,9Talmud Bavli, Bava Basra 11a when it relates the same story, attributes the philanthropy to King Monbaz, although that might just be a reference to the dynastical name, as we often find in the Talmud.  When other family members expressed their dismay that the family treasury was being depleted for this purpose, the king simply responded that “our ancestors stored up their wealth below while I am storing it up above.  Our ancestors stored it up in places where hands can reach, while I am storing it, up, in a place where hands cannot reach.”  We are also taught of special gold candlesticks10Talmud Bavli, Yoma 37b and plates, whose creation she commissioned and which she donated to the Beis HaMikdash.

Once, before coming to Yerushalayim, when Helena was concerned for her son’s safety in battle, she made a vow of Nazirus11Talmud Bavli, Nazir 19b for seven years if her son were to return safely.  Once she arrived in Jerusalem, Beis Hillel said it was necessary for her to keep her vow for an additional seven years. She then became tamei and was required to extend her vow for a third set of seven years. (Rebi Yehuda, however, maintains that she was only a Nezira for a total of 14 years.) This gives us a window into the level of piety she had.

Josephus goes on to tell us that Izates had a positive influence on his brother Monbaz II (attributing the latter’s interest in Judaism to a later time period then the aforementioned Medrash).  Seeing the king’s monotheistic influence spreading, the people became wary and enlisted the help of foregin kings to remove their Jewish ruler.  On several occasions, Divine Providence protected Izates from other, more powerful kings after he called out to Hashem to save him.

When Izates was 55 years old,  he passed away, having ruled for 24 years in total.  His brother Monbaz II succeeded him.  When Helena heard of her son’s passing, she was grief-stricken by the loss but gladdened that her other righteous son would perpetuate his memory.  She returned to Adiabene to be with the older son while mourning the younger one, but she, too, passed away shortly after her return.

Knowing the importance of Hashem and the Jewish people to his mother and brother, Monbaz, had the bones of both sent back to Judah, where they were interred at the monument the Queen had previously erected near Jerusalem.  The tomb is believed to have been discovered by archaeologist Louis Felicien de Saulcy along with a sarcophagus that is believed to be that of Queen Helena.  The sarcophagus was later taken to France and can be seen today in the Louvre. The tomb, in East Jerusalem, is known as the Tomb of the Kings.  The French claim that they own the property,12“French consulate opens disputed Second Temple site in East Jerusalem,” Haaretz, 28 June 2019  But as recently as last year, the French claim of ownership was being challenged in court by Jewish groups.

In Josephus, the story of Helena’s family essentially ends at this point.  Although he wrote of his intention to continue by writing about the reign of Monbaz II, we do not have such material, if it were ever written, other than a reference in his Wars of the Jews132:19 to the fact that the army of Monbaz participated on the side of the Jews against the Romans in the Great Revolt.