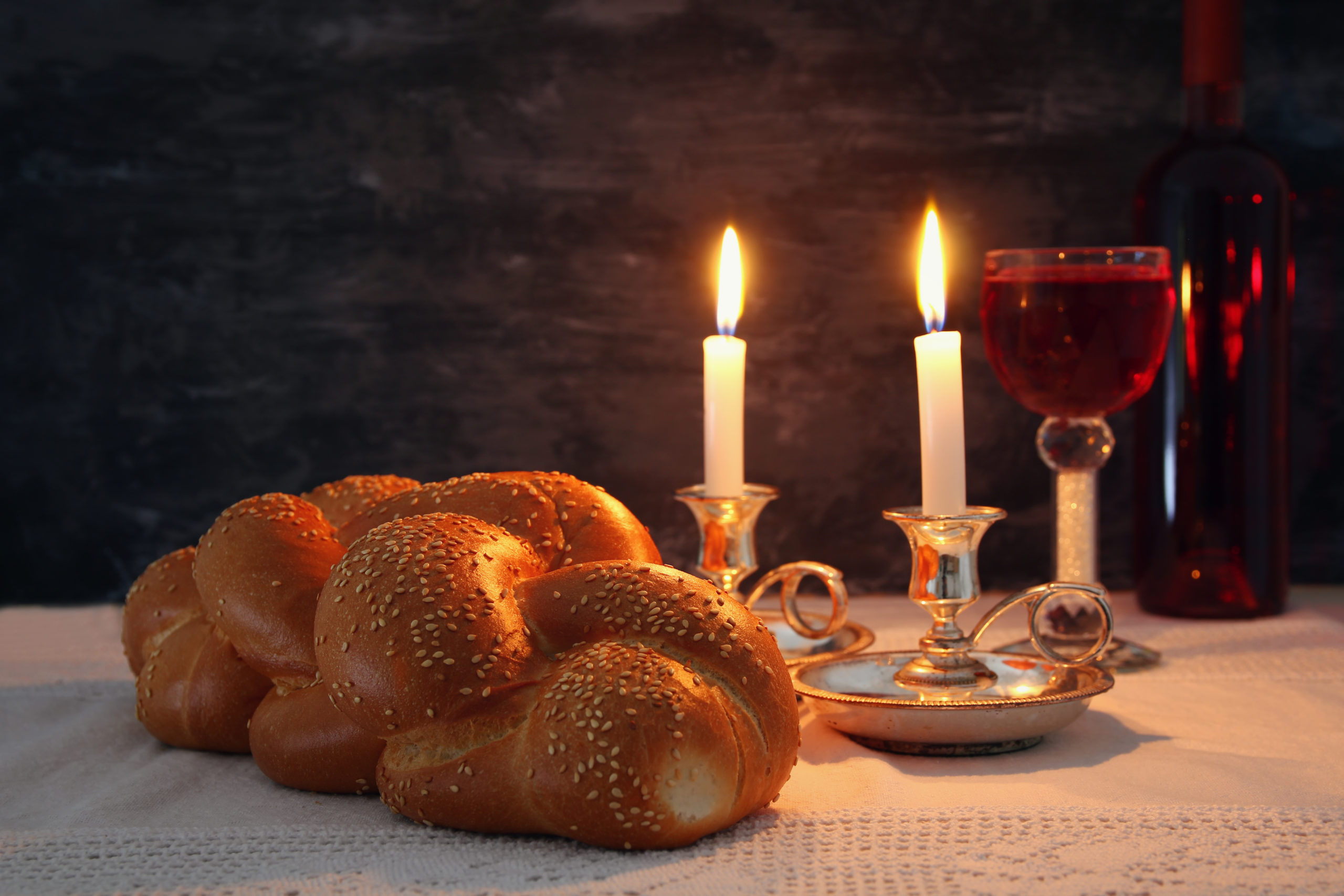 The Saga of Two Wives

The Saga of Two Wives

A Memorable Kiddush in Vienna

In the sefer Menachem Meishiv Nefesh, the author tells the following story about his ancestor, the renowned historical figure, Rav Shimshon Wertheimer. Rav Shimshon, also known as Rav Shimshon Wiener, was an Austrian financier and an advisor to the Austrian Emperor, Leopold I. He was also the chief rabbi of Hungary and Moravia, and rabbi of Eisenstadt.1And a one-time candidate for the rabbinical position in Cracow, as mentioned in the article “The Prince a Rav – Saul III” in Kankan No. 8.

The Shamash Gives out Addresses – I

As was the custom each week, the shamash was setting up Shabbos meals for the travelers and alms collectors who were spending shabbos in town.

“Shimshon, you will eat at the home of Mrs Reich.2A fictional name. Here, take the address,” said the shamash, handing Shimshon a small slip of paper.

“Mrs Reich? But she has no husband.” Shimshon wondered aloud as he took the paper.

“That’s right. Nebech, her husband died tragically, leaving her a very young widow. But don’t worry, she is very wealthy and you’ll have all you need for Shabbos.”

With that, Shimshon made his way to shul for Friday evening davening. Following davening, he went to the Reich home for the Shabbos meal, and upon arriving, he discovered there were many other guests there as well.

The next day, following the Shabbos afternoon meal, Shimshon went up to the hostess and thanked her for her hospitality.

“It was my pleasure,” she replied. ”May I ask where you are from? You don’t seem like just another wandering beggar…” “What should I tell you? My name is Shimshon Wertheimer, and I am from Worms. My father is R’ Yossel Wertheimer, the parness of Markbreit. My wife is Mrs. Frimet, the daughter of the  Fuldaer rav, R’ Itzik Brillin.”

“So why is such an honored person as yourself wandering with the common vagabonds?”

“I have been wandering around since the expulsion of the Jews from Worms. Everyone escaped, but in the panic, I became separated from my wife, and I’ve been traveling around in search of her.”

“It’s been at least three years.”

And with that, Shimshon took leave of Mrs. Reich and returned to the hekdesh3A rooming house that existed in every Jewish community for the travelling poor and itinerant peddlers. where he was staying to rest a bit before going out to learn.

On motzei Shabbos, the widow called a close family member and related her encounter with the young man whom she had hosted on Shabbos.

“Can you try to find someone to approach this young man and convince him to seek a heter mei’ah rabbanim, so that he will be free to marry me. I will pay for all the expenses.”

“What?! You want to marry a common wayfarer? What’s gotten into you?”

“Yenta, you haven’t even seen him yet, and already you are judging him? I’m telling you this man is gold.”

“Well, of course I’ll give you a matchmaker’s fee”

“Ahh… now you’re talking. You can rely on me, consider it done.”

“Thank you. I knew I could count on you. A gutte voch.”

Mrs. Reich’s relative did as she was instructed and the shidduch was suggested to Shimshon. A few days later, he returned with his response: He would, indeed, agree to marry the widow following a hetter mei’ah rabbanim. He was provided with money for travel expenses and outfitted with a new suit and hat, and set out to procure one hundred signatures from rabbanim in three different countries.

After some time, he was successful in arranging for the hetter mei’ah rabbanim, after which, in due course his marriage to Mrs. Reich took place in Vienna. After the wedding, Shimshon took over the management of his wife’s business, and through his efforts, it expanded and began to flourish more than ever.

Everything was going smoothly, that is, until, one fateful erev Shabbos, some months later. As customary, the shamash in Vienna, was allocating invitations for Shabbos meals to all of the travelers staying temporarily in the city, when he was approached by a lady visitor.

The Shamash Gives Out Addresses – II

“Mrs Frimet, you are invited to eat the meal with Reb Shimshon Wiener and his family. Here is the address,” the shamash said, handing a slip of paper to her. “Thank you, git shabbos.”

“Why, is something wrong with him?”

“Wrong with him?! How lucky you are! He’s very rich, and you’ll have anything you want. After Shabbos he’ll probably give you a pretty penny too!”

Friday night, Reb Shimshon came home from shul with a glowing countenance, greeting his wife and guests with a warm “good Shabbos.” The table was beautifully set and the elegant chandelier cast its warm glow upon everyone seated around it, resplendent in their Shabbos finery.

When it came time for kiddush, R’ Shimshon sang it with his unique nusach, smiling broadly.

“This is my Shimshon’s nusach for kiddush!!” Frimet thought to herself, “Could there really be someone else who has the very same nusach?!” She quickly dismissed her suspicions, thinking, “Perhaps this man is a relative of Shimshon, and received the nusach form a common ancestor.”  But then the zemiros began. “Isn’t this my Shimshon’s Kol Mekadesh!? And his special Menucha VeSimcha!” Frimet became very flustered, as it began to dawn on her that maybe, just maybe, the man seated at the head of the table was indeed her Shimshon.

“But Shimshon didn’t have a beard. A few years have passed, of course, during which he’s gotten older, and he could have a beard.” Frimet started studying R’ Shimshon from all angles. “Could this be my Shimshon? But why would he have remarried?”

Frimet was confused, not knowing what to think.

On Sunday, Reb Shimshon sent his servant to give each of his Shabbos guests a nice sum of money.

One guest, however, wasn’t content with that, and asked instead to meet with Reb Shimshon. “Excuse me! Please, I don’t want the money, I want to discuss something with him.”

Hearing this plea, Reb Shimshon agreed to meet with her. “How can I help you?,” he asked.

“Please excuse my asking, but were you, by any chance, married once before, prior to this marriage?”

“Yes, indeed! I had a wife, Frimet, the daughter of R’ Yitzchak Brillin from Fulda.”

Reb Shimshon, in utter shock, shouted, “Yes, it is you! Of course!”

Reb Shimshon found himself in a great quandary, having just learned that he had two wives: His first wife, Mrs Frimet, the bedraggled woman now standing before him, and in another room, his current wife. “Frimet, I really don’t know what to tell you, I’m speechless. I searched for you for so long and I didn’t hear anything from you… Please wait here, I’m coming right back.”

R’ Shimshon went into the next room and approached his wife. “There’s a problem…”

“Shimshon,” she interrupted, “from getting to know you, I know there is no issue you can’t solve.”

“Listen, my dear wife, the problem is greater than you think! My first wife, Frimet, has appeared….

Actually, she was here for the Shabbos seudah, amongst the guests.”

“This is indeed a big problem. What does one do in such a case?”

“Halachically, I need to divorce you and my wife Frimet. Only then I can choose whomever I want to marry, and marry her again.”

His wife nodded quietly. But, she thought to herself, “perhaps, then, it’s not such a big problem after all. I can’t imagine he’d opt for that shabby-looking woman when he can choose me, an up-to-date and sophisticated lady who brought him wealth and status.

Meanwhile, Reb Shimshon returned to Frimet. “Although it’s not very pleasant for me to have to tell you this, the correct thing to do in this situation is to divorce you and my other wife. Then I can choose whichever one of you I want to remarry.”

“Oh, Boruch Hashem! Now at least I will be able to marry someone else, whereas until now, I was an agunah. I’ll finally see the end of my sufferings.”

The following day, Reb Shimshon went to the Vienna beis din with his two wives, where he gave each of them a get. Then, with tears in his eyes, Reb Shimshon went up to his rich wife and said, “I have decided to remarry my previous wife, Frimet. I will return to you your entire fortune – what’s yours is yours.”

Both women were completely shocked by R’ Shimshon’s decision.

Eventually, Reb Shimshon’s second wife came to terms with his decision, thankful for the few short years she had been granted to be married to a great man such as him.

Vienna was abuzz with this story, and everyone who heard was amazed at what a righteous and upstanding Jew it showed Reb Shimshon to be. So far word of this episode traveled, that the following day, Reb Shimshon received an invitation from the Holy Roman Empire, to visit King Leopold I, who had heard this story and wished to meet a man of Reb Shimshon’s righteousness. Later, Reb Shimshon would become one of the king’s closest advisors.